← My Facebook Manifesto. [06May2017]
Shiprocked – New Edition launched in Dublin →

The current (2017) UK General Election campaign is very much of it’s time – Brexit, Corbin, May,  but is also reminiscent in some ways of one 30 years ago, which I always consider as *MY* election, given that I covered it hour by hour in my role as Head of News on Radio Caroline, then broadcasting to an audience of around 3.5 million people from a long established anchorage in International Waters, just outside the 12 mile territorial limit off the Essex coast. 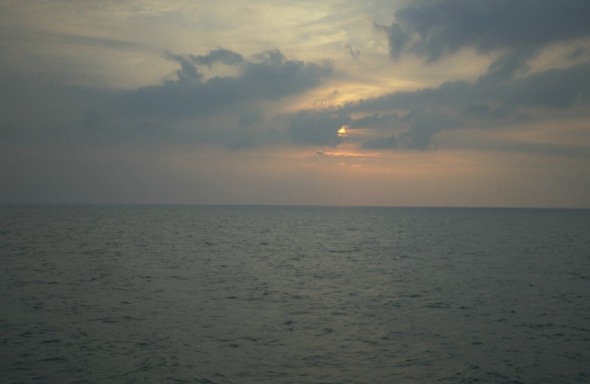 Like this years election, it was called early by a female Tory Prime Minister seeking a third term for the Conservatives and banking on doing well against a Labour leader strong on conviction, popular with the grass roots but possibly less so with the voters.

As with this years election, parliament was dissolved in May for an election date in early June (June 8th this time round, June 11th in 1987).  As is normal in such circumstances, a number of susbstantial and some minor pieces of legislation were rushed through parliament on both occasions, to allow them to come into law before the election, as otherwise they would have to start from scratch again following the election. This “wash-up” is done with agreement between government and opposition, and means that fairly complex pieces of legislation can come into effect with far less debate and scrutiny than usual.

As I was listening to the final pre-election “Today in Parliament” podcast from the BBC the other night, and hearing the reading of royal assent for a whole batch of bills  – Digital Ecomomy Bill, Bus Services Bill, Higher Education bill etc – it reminded me on a piece of legislation which slipped through almost unnoticed in the 1987 washup, greatly expanding the size of the United Kingdom and profoundly impacting one small group of people – the little community of broadcasters on board the Radio Caroline ship.

The Territorial Sea Act of 1987 changed the way that the “12 Mile Limit” was calculated, taking any sandbank or rock within the limit and uncovered at low tide as dry land, and thus the base for a further 12 miles extension.  So a sandbank 11 miles from the coast uncovered at Spring Tide could have the effect of converting the 12 miles limit into 23 miles, and if within that extended limit there was another sandbank . . further still.  The way that the coast was calculated on bays and large estuaries was also simplified with similar effect.

The end result was a land-grab ~(or “sea-grab) bringing thousands of square miles of formerly international waters under British jurisdiction – including the patch of sea where Radio Caroline was located,  the “Knock Deep” also known as “Pirate Alley” as protected from the worst seas by nearby sandbanks it had been a favoured location for pirate ships over the years, with at least three (Mi Amigo, Ross Revenge and Communicator) having used it at different times.

The new act extended the limit to cover this area, and due to the sandbanks occasionally surfacing at the lowest of tides, for a further 12 miles beyond it.  Radio Caroline would have to move to more open waters, further out to sea, and with less shelter.

After much discussion, a new anchorage was eventually decided on, this time off the Kent coast, and approx 18 miles from the nearest point of land (North Foreland), and a mile and a half from the new territorial limit at this point of the coastline.

But 1987 was very unlike 2017 in terms of technology and information flow. There was no internet, no ability to search Hansard (the record of UK parliament) and as the bill was not particularly newsworthy in more general terms, no reporting of when its provisions might come into law.  As parliament dissolved with the Territorial Sea Act now passed into law, we had no idea when it would be enacted, and had to arrange for a tug from The Netherlands to come as soon as possible to assist us in raising anchor and moving to our new location (Caroline’s 1000 foot extra strong anchor chain being too heavy for the ship to lift under its own power).

Not knowing the enactment date, and whether we might already be within the UK jurisdiction, we had a nail-biting wait as day after day passed with no word from land as to when we would be moved. We figured we would be safe until after the Election Day in any case, and were mightily relieved when the tug showed up on June 10th, one day before.

The Territorial Sea Bill, passed in a hurry before the 1987 election pushed Caroline out into deeper, rougher waters, and ultimately a date with the Goodwin Sands some years later.  This was surely a beneficial byproduct of the legislation, if not one of the prime drivers of it.

It’s remarkable though, that a bill so greatly extending the physical size of the United Kingdom could pass so unremarked by media in the run up to a General Election.

It makes you wonder what slipped through this time round doesn’t it?