I’m currently on-air at 8Radio.com till 2am.

That lovely heady vibe of a late night radio studio, lights down low, music up loud. 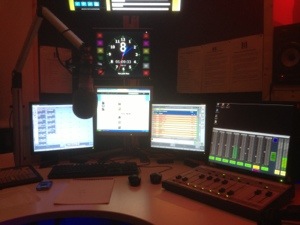 Whenever I tell people what I have done, some politely look away, others react with shock . . .

It’s just over 18 months since I made the decision described in the post: Farewell Unreal World.  The decision which just seemed to evolve naturally as my tastes gradually changed, but which has shocked some people far more than anything else I have done in my long and colourful ife. The decision that I no longer needed a television.

If you read the piece I wrote at the time, you will see that this was not so much a sudden decision to do something radical, as the logical de-cluttering of my lifespace by getting rid of a device which I no longer regularly used.  I thought it might be interesting to write about it, and I certainly never expected it to provoke the sort of reaction it did (and still does) from people I meet. But more of that later.

First: a quick catch up. Yes, I am still living without a television, and I so seldom remember or notice this changed state that I have forgotten to write this followup piece on multiple occasions. I was going to write a follow-up when a month had passed, but I didn’t remember, so then I told myself 6 months. But the next time my TV-less status came into my mind it was 9 months, so I resolved to wait for the year anniversary, and forgot again. The only reason I’ve managed to hit the 18 month date is because I put a reminder in my phone the last time the thought crossed my mind, back in February!

So, my life without the actual object in the room seems to be pain-free (I’m not saying “my life without TV” since I had gradually diminished and ceased watching before getting rid of the actual device). I noted in that article 18 months ago having a stack of unwatched DVDs ready in the corner in case I needed entertaining . . . well, quite a few of those are still unwatched, some have been gathering dust for a long time. I will watch the occasional old film, or the odd TV episode on DVD, but aqt a rate where it would take me about 3 years to get through one season boxset. When I got rid of the TV I reminded myself that I could, if I so desired, catch the odd really good TV programme online. 18 months later, my online viewing in that time consists of two episodes of a series on canals from RTE, and assorted video clips from news stories on the RTE and BBC News websites.

As I said, disposing of the TV set and doing without live TV just seemed pretty natural to me at the time, given that I had stopped using it. I imagined that others might find this a little off – people are pretty wedded to their TV after all – but even I was shocked by some of the reactions from people in my life who heard of my decision or read the piece.

There was a visceral, almost fearful reaction, from those around me.

People who had happily chatted to me about “crazy” stuff I had done in the past (such as doing a naked photo shoot for an album cover and Hotpress magazine article, or running away to sea to do offshore radio) declared that this was just too odd.

“You’ve gone too far this time, It’s not funny, just plain weird” one co-worker told me.

Some pitied me. “If you have an addiction to TV, you should just try cutting down a little – there is no need to over-react by getting rid of it altogether” another colleague tired to counsel me, totally missing the point that I had dispensed with the set because I was hardly ever watching it, not because I felt I was abusing it.

Many people seemed offended by my decision to get rid of the TV, seeing it somehow as an attack on themselves for still continuing to enjoy television. Some felt that I would have problems visiting other people’s houses who had TV, because  either my hosts would have to turn off their set, or I would be “offended”

Nothing could be further from the truth. I have no problem visiting houses where there are TVs, just as I have no problem visiting people who have Black & Decker Workmates, Wii games consoles, or motorbikes, which also happen to be things which I, personally, do not use. Likewise, my personal preference in women tends to run towards dark hair, and I haven’t dated a blonde in 20 years, but no one would expect me to be offended by, or avoid visiting,someone just because they have a blonde partner.

To me, the way people feel so very personally challenged by my choice to do without a particular domestic accessory tells me more about their anxieties about the relationship with television than my own.

An interesting thing though. All those people, including the ones most vocally hostile when I wrote the piece, all seem to have blanked it out of their minds. They never bring it up, and in conversation will frequently ask if I saw such and such on television last night etc. It’s like I’ve made a choice which is too different for the mind to fully accept and record in memory.

Now, I’d love to tell you that my life is different and more full of time and interesting things since I got rid of the TV set, but that wouldn’t be strictly true, as my life had already become these things gradually, as my viewing declined, long before I got rid of the physical object.

But I can tell you that the space it occupied has been suitably filled with clutter.