Over the weekend I had my first chance tobroadcast from Phantom 105.2′s new studios in Digges Lane, and I have to say I was very impressed.

The equipment is top-notch – but that is the least part of it. Space and light is all around you, and its remarkable how such an uncluttered environment frees your creativity to a greater degree.

The facilities outside studio are a step up too, but the best thing about the location is something that cannot be photographed – the buzz and friendliness of the other occupants of the building, the national stations Today FM and Newstalk.  Even though I was only there at odd hours of the weekend, I lost count of all of the people from the other stations who made a point of coming up to introduce themselves to me, and the regular weekday staff on Phantom say it’s just the same in primetime.

It’s great also to be back in the vibrant comercial and musical heart of the city we serve. Roll on the rest of 2011. 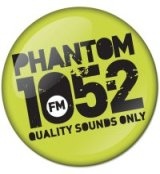 I’ll be getting to try out Phantom’s snazzy new studios this weekend as I am on covering two shows on 15/16 Jan 2011.

Saturday I’ll be in from midday to 2.30pm, and back in my old stomping ground Sunday 7-9pm hosting Random Access, the all-request show.

It’s also worth mentioning that our Arts show, The Kiosk, hosted by Nadine O’Regan will be giving away P J Harvey’s entire back catalogue on Saturday morning, 11 to midday (i.e. just before me).

Phantom is on 105.2fm in Dublin and surrounding counties.

Worldwide via the Phantom iPhone app, and at www.phantom.ie

Phantom moves away from the water – but still makes waves 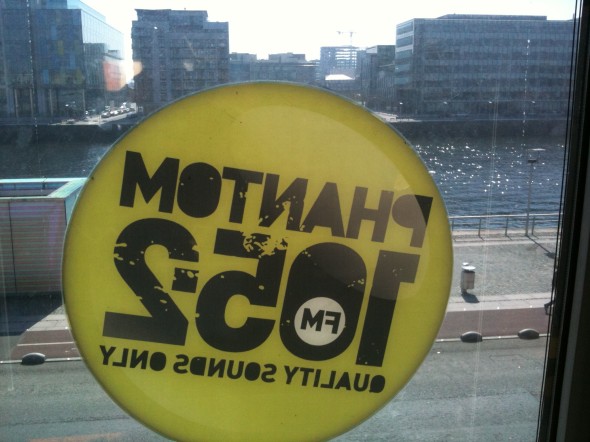 Studio with a view

Dublin’s Phantom 105.2 completed its move to new studio facilities in the city centre today, leaving behind the old dockside building that was its home since its launch as a legal station in October 2006.

While I will be sad to leave the view of passing shipping behind, I’m not sorry to be leaving what must be one of the ugliest buildings in Docklands.

Meanwhile the internet is buzzing with various stories about what lies ahead for Phantom in the future, now it has an investment from, and shares facilities with the Communicorp radio group. The fact that Phantom’s future matters to so many, and is discussed with such interest, shows the interest that Dublin’s alternative music station commands.

Will there be changes? Of course there will be – what doesn’t change, dies.

If Phantom had not being willing to make the change from pirate to temporary legal, and again to full-time legal, it would never have survived to today.

The move to Marconi House, situated between Georges and Grafton Streets puts Phantom right in the vibrant heart of the city, and back in the same part of town where its most creative pirate years were spent.

I don’t know what high-level plans are in place for the station – nor would I expect to know – but I can tell you that everyone from the CEO Ger Roe, down to occasional part-timers like myself, is enthused about the future, raring to go to meet the challenges ahead, and happy to work for the coolest station in the city.

Left behind - the ugliest building in Docklands!

. . and followed up beautifully.

Following on from my comments yesterday about the way BBC Radio 4’s The Archers handled its anniversary and other plotlines in its usual understated, skillful manner, tonight’s episode followed on perfectly from the fall of much loved Nigel Pargetter from a high roof, and a day of “Is Nigel dead or not” speculation amongst fans.

Again eschewing the TV soap model which would have had us evesdrop on the immediate and gory aftermath, tonight’s episode instead opened the morning after, as news is spreading amongst relatives, and the Nigel’s widow Elizabeth is in a shocked state of near silence. We get told that she saw the body after the fall and had to be pried away from it, but we don’t have to hear it firsthand. We know that her brother David encouraged Nigel up onto the roof against his better judgment, but no one else does yet. We’re not even sure if David remembers this yet either, as he is in a shock induced daze also, having witnessed the terrible fall. David will remember. His conscience is too strong to let him him stay quiet, but there are no screaming recriminations . . yet.

I’m an Archers listener, and despite lengthy flirtations with TV soaps including Eastenders (for most of the 90s), and Melrose Place (likewise), for the last many, many years, The Archers has been the only soap that I’ve actually followed.

The show celebrated its 60th anniversary this weekend (yes – it is the longest running drama show on either radio or TV in these islands, perhaps in the world, comfortably beating Coronation Street by nearly a decade) and it did so in it’s traditional and far more realistic style, the success of which is what has kept it on the air and popular for so many years.

Unlike the TV soaps, which regularly stage “‘spectaculars” to mark important events, or to grab audience share, which seemingly have few reverberating consequences, The Archers tends to use what I would describe as a “slow-cooker approach” to plotting, which I find much more believable and realistic.

In the extended anniversary episode, broadcast tonight, there were no plane crashes or tram smashes to bring spectacular destruction. The main inhabitants of the village of Ambridge celebrated New Year, a baby was born a little early after a scare, and a much loved husband fell (presumably to his death) from a high roof, upon which he had climbed with his brother in law to untie a festive banner.

The (presumed) death of Nigel Pargetter will not only play out in a series of consequences, slowly, over the next many months, but will amplify and re-stress storylines that have built over the last 10 to 15 years of on-off resentment between his wife/widow Elizabeth, and her brother David, who will now be perceived to be at fault for the calamity.

That’s how The Archers does stuff, slowly, at real-life speed, over long, long years or even decades.

Take for example Jack Wolley and his wife Peggy.

When Jack, one day in 2003 forgot that he had granted an employee a day off, but was discovered to be in the wrong, it was the first of many seeds of an Alzheimers storyline which would not even begin to become overt until a couple of years later.

This storyline has carried on, gradually, over the last 7 years, only recently progressing to the stage where he could remember so little, and had become so confused, that Peggy had to make the agonising decision to put him in a home. And he will live, in that home, for some time yet before he is killed off. Contrast that to the TV soaps.

About 3 years or so after Jack’s storyline began, an Alzheimers storyline was introduced for a regular in Coronation Street, who progressed from being totally without symptom, through the different stages at breakneck speed, and was dead within the year.

The slow, lifelike pace of The Archers imbues it with great depth, and often pathos, such as the way in which we could remember and contrast Jack’s memory and behaviour with Peggy over a number of successive wedding anniversaries, Christmases etc.

The fact that very often The Archers is a comforting slice of life in which “nothing happens” (because plots are not driven at breakneck speed, there do not have to be a million things going on in any individual episode) can make it strangely soothing.

I well remember, on the day of the London tube bombings, after hours and hours of broadcasts filled with doom and disaster, how refreshing that jangly theme tune sounded at two minutes past 7pm.

Ambridge - a place where nothing happens fast

Somewhere, somehow, life was going on, and that was comforting. This even though the episode itself did include reaction to the events (as a radio soap, quick edits can be made, and certain pairs of actors are on call for quick response to major events in real life, so a disaster, or a royal engagement, or an election result from today can be slipped seamlessly into casual conversation in an episode)

The other great brilliance of the show is down to its medium – radio.

I’ve always believed radio drama of infinite superiority to television, simply because of it’s book-like ability to let me use my own imagination. I have my own image of what central couple David and Ruth Archer look like, my own mental map of the landscape, and the picture I imagined of Nigel falling from that high rooftop tonight was more vivid and scary than any that TV could produce.

The Archers is 60 – long may it continue.

Today on Radio Seagull I’m devoting my show entirely to music released during the last year (or, to be more accurate, from albums released during 2010, plus a couple of 2010 EPs and singles/demos).

They are all good, but I’d single out Cathey Davey‘s demented “Army of Tears” for special mention, while the Carolina Chocolate Drops “Knockin'” is a wonderful fusion of sounds and funky sassiness. Lloyd Cole gives a glimpse of the alpha/beta sexual dynamic with female mate choice in “Man Overboard” while Heart‘s “Red Velvet Car” is the lush title track from their best new album in 30 years.

I’ll edit this post to include a full track listing after broadcast.

EDIT: Here it is: 1101-sconway-NewYearsDay-playlist

These are some of the artists whose releases I’ve most enjoyed playing during 2010, I hope you enjoy hearing them.

From 6-8pm UK time (7-9 in Central Europe) on 1602Khz MW in the Northern Netherlands, and worldwide at RadioSeagull.com